One Hundred of Marvel Best-selling, Collections and Trades Available in French, German, and Italian

Available on tablets, smartphones, and mobile devices, Panini will launch their translated Marvel trades across the world. The inaugural Marvel and Panini launch catalogue will feature over one hundred Marvel collections which will include some of Marvel’s greatest titles like Civil War, Avengers, Ms. Marvel, Deadpool, and more!  Additional Marvel trades are planned to be added each month to offer an even more immersive deep-dive into the Marvel Universe.

“The arrival of the Marvel titles in a digital format has been a long time coming…. It’s probably one of the most anticipated e-book launches ever in our markets — we are proud to have made this happen and to be able to bring the Marvel experience in French, German, and Italian to brand new platforms.” says Panini Publishing Director Marco Lupoi.

“Marvel has become a global brand with fans all around the world,” says Marvel SVP Sales and Marketing, David Gabriel. “The partnership with Panini will allow us to introduce Marvel’s rich history of action-packed stories to new audiences who are curious about the continuing adventures of the Avengers, Spider-Man, Black Panther, and the rest of the vast Marvel Universe.”

Santiago García and David Rubín team up to put a fresh—and wholly blood-soaked—spin on the violent and savage tale of BEOWULF in a new English translation of the 1,000-year-old myth. It will be collected in a lush, full-color hardcover this December from Image Comics.

The story of Beowulf has inspired an enduring epic poem, become a foundational piece of English literature, and influenced countless great works of fiction in numerous mediums. Now, it’s getting an entirely unique new graphic treatment—packed to the brim with enough brutality and gore to satisfy even the most Viking of sensibilities.

END_OF_DOCUMENT_TOKEN_TO_BE_REPLACED

“In a world filled with hundreds of prequels and sequels, it’s very refreshing to see a new original Stan Lee creation that is unlike anything you’ve ever seen before. It’s been a dream come true working with Stan Lee and Michael Benaroya. Stan is the greatest story teller of all time and the billions of dollars his stories have generated at the box office is a testament to his genius. These days the big studios only care about already established film brands, while people like Michael care about art and entertainment, both new and old. I’ve spent years trying to secure financing for this project, and I’m very grateful to Michael Benaroya who is a true champion for writers, filmmakers and artists. NITRON is fascinating beyond anyone’s wildest imagination.” ~Keya Morgan

“Without giving too much away, I can say that Stan has created an intricate story and mythology with characters that are unconventional yet relatable. Overall, I think Stan’s NITRON concept is fun and is new and this makes it a very exciting venture for Benaroya Pictures. Beyond entertaining lots of comic fans, we see value in comics as a great way to ignite fan enthusiasm and engagement for broader content plays. We are very pleased to not only have the opportunity now to collaborate on extraordinary content, but to do it with a truly iconic legend in Stan Lee. We look forward to going to work with Stan and Keya Morgan on this and making something discernibly unique.” ~ Michael Benaroya

Hey there heroes! Don’t forget that the DC Rebirth series begins this Wednesday, May 25. Let’s see how this “definitely not a reboot” story line works out for DC. 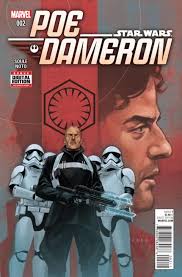 When last we left Poe, he was greeted with the news that the First Order had arrived on planet after tracking his ship across the galaxy. Issue #2 sees Poe and the Black Squadron attempt to get the upper hand only to find themselves in an even worse predicament.
END_OF_DOCUMENT_TOKEN_TO_BE_REPLACED