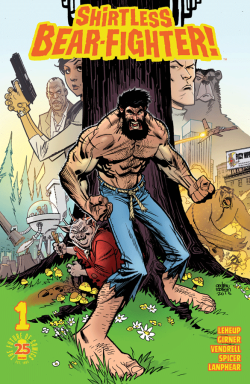 ‘Shirtless Bear-Fighter’ #1  is just as ridiculous as its title suggests. Maybe even more so. Between the superhero origin story that features a baby with a full grown beard and a bribe of two tons of flapjacks to fight rogue bears, it’s hard to get through the issue without stopping every page to laugh at the sheer lunacy of the plot.

Of course, this is what makes Shirtless Bear-Fighter worth reading in the first place.

Right off the bat, readers enter a zany world where bears have developed their own cities deep in the forest. One day a loving bear family finds a baby abandoned in the woods and decides to raise him as their own. That baby was Shirtless.

Shirtless learned how to be a bear and quickly proved to be stronger than an ordinary human. When humans threatened the forest, Shirtless fought alongside the bears to protect the only home he knew. But a terrible tragedy forced Shirtless to turn on the bears that raised him.

Secluded from the outside world, Shirtless limits his contact with humans as much as possible–until Agent Burke shows up.

Bears with Herculean strength have descended on the city. Weapons appear to be ineffective. Burke knows that Shirtless is mankind’s only hope, so he makes the trek to the woods in search of the hero we not only need but deserve.

Shirtless refuses to help at first, however, in true hero fashion, Shirtless appears just as the situation becomes unbearable for law enforcement.

If you aren’t convinced to give Shirtless Bear-Fighter a shot, Shirtless has a plane made out of bears. Yeah. Bear-plane.

Shirtless Bear-Fighter wears parody with a badge of honor, and for that, I salute Jody Leheup and Sebastian Girner for writing a story that knows how to poke fun at superheroes without losing the audience’s interest.

Let’s not forget the look and feel of the comic either. Nil Vendrell’s art and Mike Spicer’s colors give the action scenes plenty of power. Shirtless’ movements are so fluid, you’d think Superman is here to save the day.

You know, Stephen Colbert always warned us that bears were the greatest threat to America. Guess he was right.