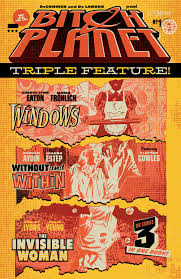 In its first anthology, Bitch Planet: Triple Feature #1 successfully expands the Bitch Planet universe by placing working women in the spotlight. Being a woman is a challenge in and of itself. Heading to the workplace only adds to the number of ways “rebellious” women can be called out for their “noncompliance.” Three women who find themselves in precarious workplace situations are Lupe, Anna, and Leslie.

We start with “Windows”, which introduces Lupe,  a former lead medic at Bitch Planet who was relieved of duty when an inmate dies on her watch.  Lupe refuses to admit she was at fault because she was overridden by her male counterpart, however, her superiors fail to take her side. Thankfully, Lupe was given a “soft landing.” Instead of ending up as an inmate at Bitch Planet, Lupe is offered a stellar employment opportunity as a maid. A maid! Despite years of study, this is the best job Lupe can muster up after being discharged.

While delivering a fresh, somewhat cold, cup of coffee to her new boss, Mr. Harding, Lupe overhears a devasting conversation. Harding has been using drones and neural implants to create private feeds for men that would allow them to see “the essence of wilderness.”  Lupe finally understands what the odd blinking from the dying inmate meant. Help.

Unfortunately for Mr. Harding, Lupe had a knife with her.

“Without and Within” focuses on a young secretary named Anna Winters. On her first day working for Gentleman Tommy Rodgers, she is asked to print a speech, a simple enough task. A few clicks and voila! A nice neat hard copy of a speech. Anna’s job is made significantly more difficult when Rodger’s pal Bisbee, decides he wants Anna.

Anna is more of a toy, a plaything that can be passed from man to man whenever it suits their needs. Bisbee forces Anna to go on a date with him before permitting her to leave the room, and she is later berated by Rodgers: “Next time you want to go on a date, finish your work first.”

The look of defeat at the end of the comic on Anna’s face is all too familiar. There are no superheroes to save the day. Anna must either give in or fight back. 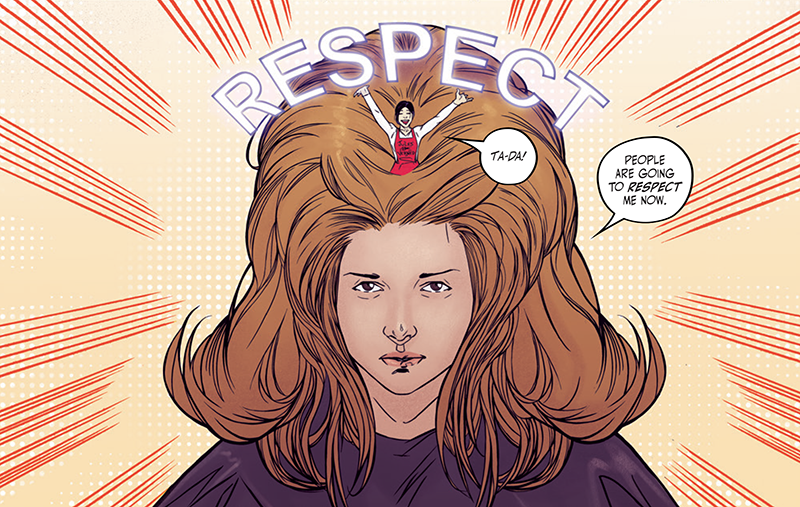 Finally, we arrive at “The Invisible Woman.” Leslie has big dreams of becoming a corporate big shot. Believing that a new look is a key to success, Leslie gets a new hair-do, one that will command the respect of her colleagues. Instead of respect, however, Leslie is met with ridicule. The only thing people in Leslie’s office seem to notice is her lack of large breasts.

When Leslie’s finally called up to the bosses office she isn’t being promoted, she’s being fired.

“You didn’t get the job sweetheart. We’re going with a blonde. We gotta let you go. I’m sorry.”

On her way out of the Leslie is nearly hit by a car, is called titless AGAIN, and told to wake up. Well, Leslie wakes up all right. Inspired by the “We are Not Broken” and “Eleanor Lives” graffiti, Leslie decides that a little body paint will force people to recognize her existance. No one will forget her now.

This eerily familiar world is brought together by striking artwork that breathes life into each story. Anthologies often bear the burden of connecting stories with a unifying theme. Bitch Planet: Triple Feature #1 however, captivates audiences with ease.