When last we left Poe, he was greeted with the news that the First Order had arrived on planet after tracking his ship across the galaxy. Issue #2 sees Poe and the Black Squadron attempt to get the upper hand only to find themselves in an even worse predicament.

Enter Agent Terex of the First Order, the main antagonist of the series. Terex is hired to retrieve information Poe stole on a mission right before joining The New Republic. Although he is a constant reminder of The Empire’s fall, Terex, a former clone trooper, has earned a reputation for providing the First Order with valuable information. Thus Captain Phasma seeks Terex’s assistance on this key mission rather.

Being a clone hasn’t prevented Terex from developing a character that foils Poe’s. Both men have silver tongues that could talk their way out of a paper bag, are able to think fast on their feet, and fight vigorously for their causes. But where the two men parts ways is their method of negotiation. While Poe will use violence when no other options are available, Terex is not above blasting first and asking questions later. Currently, Terex is blasting the  giant luminous egg with flamethrowers as he waits for Poe to talk. By the way, toasting that egg is probably not a good idea. Just saying. No one knows what type of creature is in there. 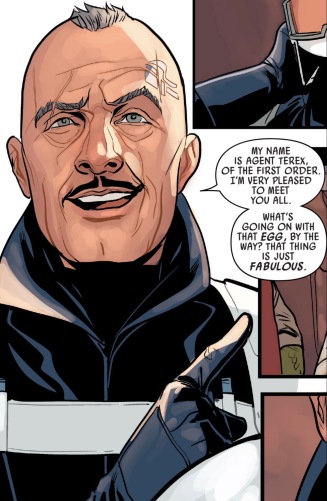 There is still the question of how the tracker managed to find its way onto Poe’s ship. L’ulo is looking might suspicious what with his “finger slipping”, accidentally firing on the enemy despite strict orders not to engage unless fired upon. Not to mention the explosion L’ulo caused by firing upon the landing pad triggering the carrier to block the only entrance to the caves. He could be innocent, but I’m really leaning toward traitor. Maybe, after reading hundreds of stories, I’m jaded. However, there’s always a traitor in the mix feeding the enemy vital information. If there isn’t a traitor within the Black Squadron and Terex managed to find a clever way to plant the tracker without utilizing someone Poe knows I would be pleasantly surprised.

Anyways, Poe’s goal of obtaining leverage basically blows up in his face. With the only way out blocked, Poe is forced to make a difficult decision. Perhaps whatever is in that egg will lend Poe a hand so he can make a great escape before surrendering the information he rightfully stole. Then again up top things are about to get a whole lot worse. Terex and his men didn’t come alone either. There is a lovely cruiser filled with First Order ships ready to greet Poe and his pals.

Poe Dameron #2 continues to delight Star Wars fans with entertaining characters and fast paced action that keeps readers at the edge of their seats even though they know Poe will survive this deadly encounter.